People often relate “ethical hacking” to cracking passwords and stealing data. But in reality, ethical hacking is used to scan vulnerabilities and detect potential threats on computers and networks. An ethical hacker must find loopholes or weak points in a computer system, network, or application and report them to the organization they are working for. In this article, let’s take a closer look at ethical hacking and how it works. 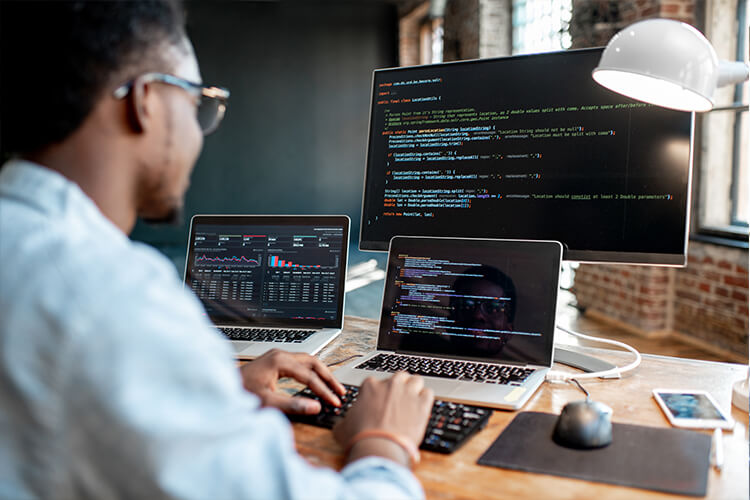 What is ethical hacking?

Ethical hacking is a practice where a professional hacker legally breaks into an organization’s computer system or network. By doing so, they aim to test the organization’s defenses to detect any vulnerabilities- data breaches and threats- in its systems and networks.

Ethical hackers, also known as white hat hackers, look for weaknesses that malicious or cyber criminals can exploit. Of course, it’s a complex process with various elements to consider. In addition, they perform several other tasks that are linked to general cyber security, and that includes:

• Collection of intelligence about entry points

• Accessing and exploiting vulnerabilities of systems and networks

• Compiling reports based on the analysis

How does ethical hacking work?

Ethical hackers investigate the system and network using the same hacking skills that cybercriminals use to hack. The following five phases are involved in this process:

The first step is to collect information about the target system. It can be either about the organization or the people linked to the target. This step involves engineering a hack based on the security measures implemented on the systems.

Hacking is mostly done through network access. Devices are often connected via a common Wi-Fi or WLAN network, which the hacker takes advantage of and tries to get unauthorized access to the target host. This process reveals the network topology and vulnerability.

After gathering the information and vulnerabilities, the hacking starts. This step involves cracking the password to break into the target.

Once access is gained, cybercriminals make sure that they maintain the key. For this, they create a backdoor that they can use in the future to exploit the system.

It’s important to clear traces of incursion after hacking. This step includes the removal of any logs, backdoors, or executables that may provide chances of leading to tracking the hacker.

What can be done to stay safe from hacking?

The following are a few ways undertaken by these professionals to keep the networks and systems safe from hacking by cyber attackers:

Firewalls are software that builds a barrier between the organization’s data and the outside world. They prevent unauthorized access and alert in case of an attempt of intrusion. Companies can buy a hardware firewall depending on their broadband router.

A VPN can be used to encrypt all the activities that are done online. They will bounce the network’s IP address around various locations, making it challenging for hackers to track the real IP address. When you are using a VPN, cyber attackers will have no idea about your browsing details and will be unable to redirect you to fake sites.

Strengthen safety by creating long, complex passwords of at least fifteen characters with a combination of characters, numbers, and special symbols. A complex password ensures that cybercriminals have a hard time invading the system. Please do not use the same password for different websites, and it’s always best to change them as often as possible.

This involves discouraging search engines from indexing admin pages using the robots_txt file. Indexing on Google will make it easier for hackers to find them.

Software companies release an update only when necessary, often n invoinvolvending a lot of money. When the updates are not installed, it increases the chances of being exposed to security vulnerabilities. Hackers can scan several websites within a few hours, trying to break into the websites that allow them. So, updates should be installed as soon as possible.

This is especially important for the company’s devices which can give an easy access route to the servers. It should be made sure that the logins expire immediately after inactivity. Also, whenever a device is connected to the network, it should be scanned for malware.

Internet Marketing - The Ultimate Guide to Building a Successful Website